If you are a stock trader or investor who is having trouble sleeping at night because you don’t know how to do the relative strength indicator calculation, then worry no more. You’ve come to the right place.

How relative is the strength?

Wait a minute, I hear the unimaginably astute reader who remembers something from an earlier article say, that sounds a lot like the beta.

Well spotted. But there is an important difference between relative strength and beta. Very simply, beta is a measure of the sensitivity of a stock to market movements in either direction, i.e. if the market moves up or down the stock price moves up or down in a fixed relation. Here is a detailed explanation of how beta works.

The Relative Strength Index or RSI

So what does the Relative Strength Index show? The answer is that it shows the strength or weakness in recent and current price movements of a stock.

Before we get into the calculation here is the formula for the Relative Strength Index, where

Then the formula for RSI is:

OK so now we’ve got the definition out of the way let’s dive into the calculation itself. No worries, this will be more like a gentle wade into a kiddies paddling pool rather than a swan dive into the deep end.

There are three kinds of averages used to calculate the RSI

Here is a step by step calculation for the RSI for the 14-day period up to 26 June 2020 for the State Street Global Advisors Standard and Poor’s 500 index-tracking ETF which goes by the symbol SPY. This example uses a simple moving average calculation without smoothing. 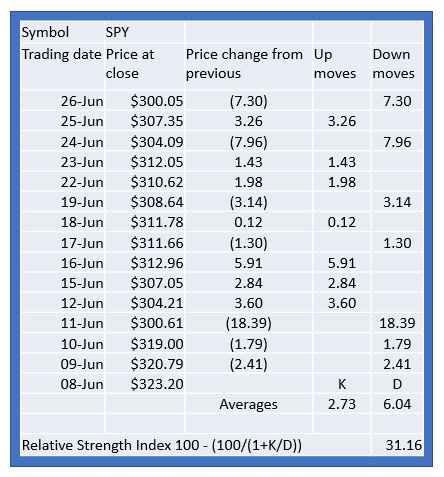 The RSI as calculated in this case using a simple moving average, as proposed by Mr. Cutler, yielded an RSI of 31.16.

Here is a chart of the SPY for the same period. 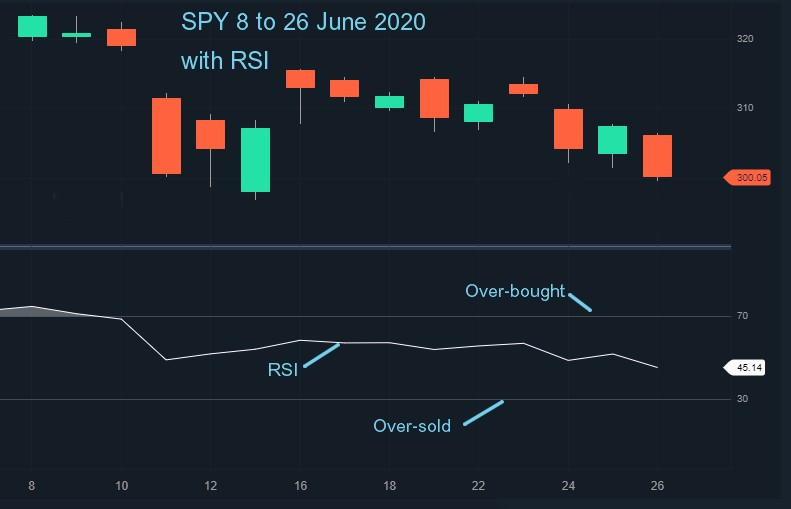 What does the RSI show?

The Relative Strength Index is just an indicator of price momentum. Let’s say this another way, it indicates where the current price is now in comparison to where the price has been over the last 14 trading days. This is sticking with the 14 day RSI period.

The RSI is considered to give a sell signal if it crosses from above 70 and moves consistently lower.

The reverse also applies. The RSI is considered to give a buy signal if it crosses from below 30 and moves consistently higher. Here is an example of the same ETF as considered earlier, the SPY for the period February to June 2020.

As we can see if we had only considered buy and sell signals from the RSI during this period we would not have made particularly good trading decisions. In fact, all through the first half of March 2020 when the market was tanking the RSI was giving repeated, though not very strong buy signals.

The RSI and MACD

Let’s take a look at the SPY for the period of large price movements between February and June 2020 and compare the signals generated the RSI with those of the MACD, which we examined here.

As the chart shows the SPY, which is just tracking the Standard and Poor’s 500 Index reached a peak around mid-February after a long and significant bull market over the previous 3 years. The market started to drop in early March and plunged to a bottom about 30 percent off its February peak around 23 March. The market climbed back from there and nearly reached the same price level as its earlier February peak during the first week of June.

Signals from the RSI

Over this period the RSI gave the following signals

Signals from the MACD

Over this same period, the MACD gave these signals

For this ETF and during this period there is little doubt that the MACD gave more reliable and successful buy and sell signals than did the RSI.

Limitations of the RSI

I think we have seen that the RSI is actually quite limited. That should not be surprising as it is only a way of looking at price movements of a stock without reference to the market or other factors. It is just a price momentum tool and should only be used with that in mind. To find out more about the Relative Strength Index, check here.

A single-page PDF summary of the Relative Strength Index is available here. 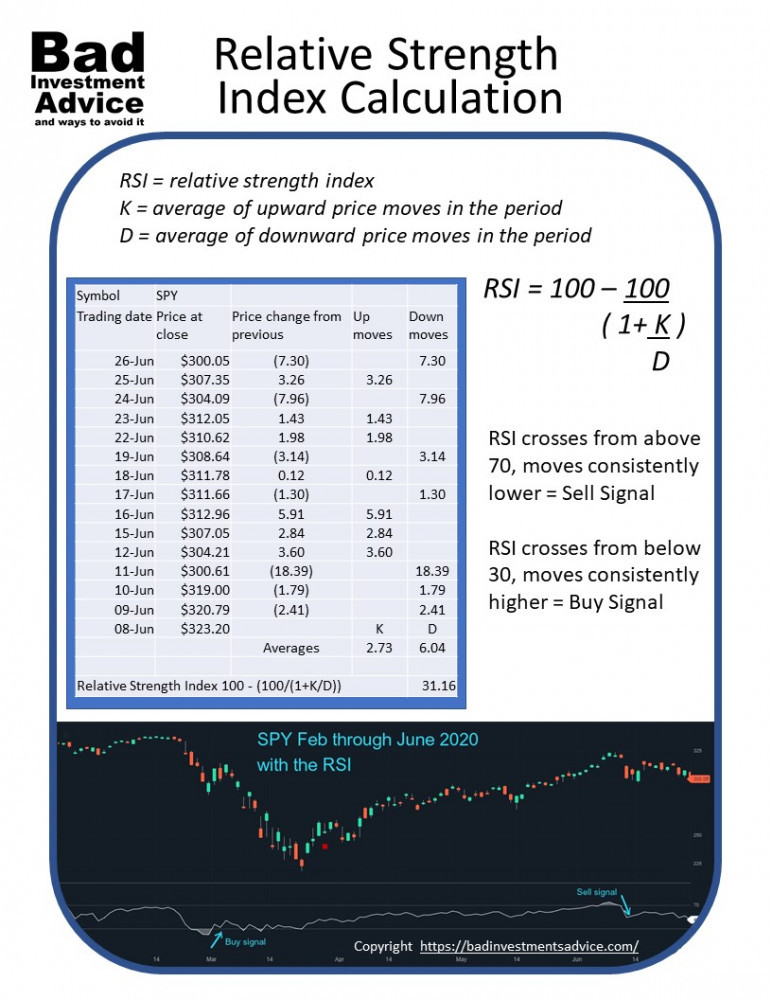 I hope you found this article interesting and useful. Do leave me a comment, a question, an opinion or a suggestion and I will reply soonest. And if you are really inclined to do me a favor, scroll down a bit and click on one of the social media buttons and share with your friends. They may just thank you for it.