If you are a trader or stock investor looking into price action tools, at some point you will need to know what is the ADX. How does it work and what can it show me.

The ADX stands for the Average Directional Index. The term itself is potentially misleading as the ADX itself is non-directional. The ADX is a number between 0 and 100 that represents the strength of a price trend, whether that trend is up or down.

The ADX is often referred to as the trend strength indicator. Turning that phrase around means it should be used to assess the strength of a price movement trend.

How is the ADX derived?

The ADX is usually displayed as a system of three lines, the ADX itself, the +DI, and the -DI.  All three lines are usually 14-day smoothed moving averages and all three together are often referred to as the Directional Movement Indicator.

Outside movement. When the high goes higher and the low goes lower, the price range is expanding. The greater of the differences between the two highs and the two lows determines whether +DM or -DM wins. In the example above the difference between the lows is greater.  +DM = 0 and -DM = 2.

The True Range for each period, which is typically one day, is the larger in each case of the absolute values of:

So what does the ADX show?

Now that we have plodded through much of the detail of what lies behind the ADX let’s look at what it shows.

The ADX and the Directional Movement Indicator system was developed by J. Welles Wilder and first published in his book, New Concepts in Technical Trading Systems.

How the whole ADX and DMI system works

Putting all this together, the ADX and DMI system can be used to spot trading opportunities in a particular stock, currency pair, or commodity as follows.

For a long trade

For a short trade

And here is what that looks like as a flowchart.

So much for theory.

It’s time to have a look at how the ADX/DMI system performs under some familiar price movements. Here is how the price of the Standard and Poor’s 500 Index tracking fund from SPDR, symbol SPY behaved between early February and mid-April 2020 with the ADX/DMI shown underneath.

This was a period of strong price movement. The SPY, tracking the Standard and Poor’s 500 index had reached an all-time high of $329.08 on 19 February after a long bull market of a few years. Then the price dropped precipitously to a low of $218.26 on 23 March after which the price started to climb back again.

The ADX/DMI combination gave the following signals during this period

Let’s compare what buy and sell signals the Moving Average Convergence Divergence indicator or, MACD for short gave for SPY for the same period.

This article gives a detailed explanation of how the MACD works and generates buy and sell signals.

Here is what the SPY price, the ADX/DMI, and MACD look like for that period.

In this period the MACD generated two clear signals

ADX/DMI, the MACD, and the RSI

Making another comparison, let’s look now at the Relative Strength Indicator or RSI for short and what indications that gave for the same price chart.

The RSI was also an indicator developed by J Welles Wilder and published in the same book, New Concepts in Technical Trading Systems.

This article gives a more detailed look at the RSI.

This is what the SPY price, the ADX/DMI, the MACD, and the RSI look like on that same price chart.

If you had followed just the RSI and bought the SPY on 25 February you would have entered at around $329.79. You would not have been a very happy camper when the price continued to tumble down to a low of $218.26 a month later.

Just considering the price movement of the SPY for the period 1 February to 14 April 2020, this is what would have happened if we had followed signals from these systems, assuming that where relevant we started with a long position.

In contrast, the RSI gave a sell signal late in January and if we had been following only that indicator we would not have been invested in SPY at the start of the period. The RSI gave a buy signal on 26 February. Following that signal, we would have bought at $308.32. Assuming that we held that position until 14 April when the price reaches $282.55. So that would have been a loss of 8.36%

For comparison, the SPY price over the whole period started at $320.81 and ended at $282.55. So that was a loss of 11.93% which is the loss we would have experienced had we adopted a simple buy and hold strategy. Here is a comparison of the results.

What we conclude from this

Best conditions for the ADX/DMI

The ADX/DMI system works best with volatile price movement. The system is often used for Forex and commodities trading. It can be used for stocks as long as there is a degree of volatility. J Welles Wilder measured volatility through the Average Trading Range which was a part of his ADX/DMI system. Price volatility is needed for the ADX/DMI system to generate clear signals.

This article gives more detail and background on the ADX/DMI system.

Answers to some questions about the ADX

Q Is the ADX a good indicator?

Q How is the ADX indicator calculated?

Q What is the meaning of the ADX indicator?

A. ADX stands for Average Directional Index. It shows the strength but not the direction of a price trend.

Q Which indicator works best with the ADX?

Here is a single-page PDF summary of the ADX/DMI. 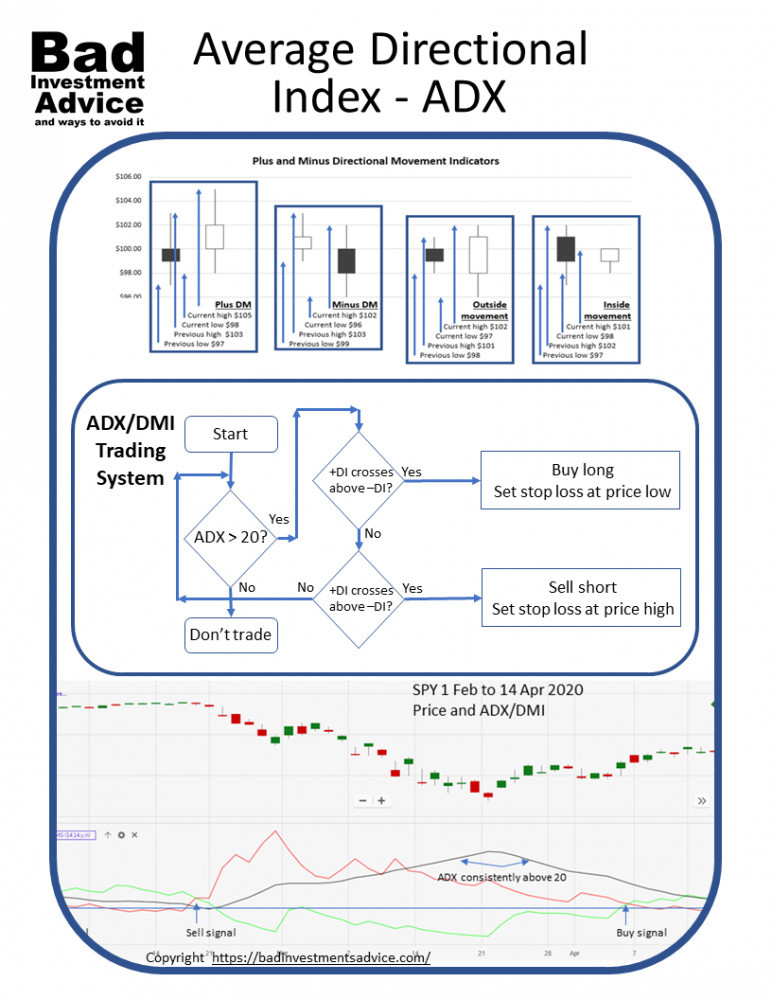