What is the best use of the stochastic oscillator? An excellent question. Let’s start with a simple definition.

The Stochastic oscillator can be set up for any period but the period usually chosen is 14-days, though that could be 14-weeks or 14-months or any other number of periods.

The term Stochastic comes from Greek and means randomness. The oscillator is intended to indicate a change in momentum and relies on a simple set of assumptions.

The Stochastic oscillator is calculated from a simple formula.

There are two versions of the Stochastic oscillator in use, commonly referred to as Fast Stochastics and Slow Stochastics.

Fast Stochastics uses a display of %K and %D as the 3-day simple moving average of %K. %K, the fast oscillator is shown as one line, and %D is shown as another line.

%K moves faster than %D and quite literally can jump all over the place. Here is what a display of the popular SPDR Standard and Poor’s 500 index tracking ETF, symbol SPY looks like for the period February through 21 April 2020.

I know that was a very volatile period of price movement, which is the main reason I keep coming back to it, but I for one find this very difficult to read. What is more, I would not have a great deal of confidence in any signals that such a display is trying to tell me as the fast black line, i.e. %K is cutting across the slower red line, %D often back and forth every day.

Here is a display of the same price chart with the Slow Stochastic oscillator.

If you compare the two displays of the Slow Stochastic with the Fast version, you will see that the slow red line of the Fast version has now become the fast black line on the Slow version.

If you do some online research and general reading on the calculations behind the Stochastic oscillator, you may quickly be confused. It sure confused the hell out of me.

There are, – let’s just say inconsistent versions of how the oscillator is calculated in the explanations you will find. Some very prominent sites will tell you that the oscillator displayed is %K and %D and some say %K is the slow indicator and %D is the fast indicator and many talk in imprecise ways about how the 3-day moving average(s) is/are applied.

The clearest explanation I found was in a hard copy reference book, Technical Analysis of the Financial Markets, by John Murphy, available from Books-A-Million.

Buy signal – a “go long”, or buy signal is generated when both %K and %D are below 20 and the fast line, %K crosses over the %D in an upward direction heading above 20. The indication to close i.e. sell that position happens if or when the %K line crosses back over the %D line irrespective of the value, i.e. whether it is above 20, below 80 or in the middle.

Sell signal – a “go short” or short-sell signal is generated when both %K and %D are above 80 and the fast line, %K crosses over the %D in a downward direction heading below 80. The indication to close i.e. buy back that position occurs if or when the %K line crosses back over the %D line, again irrespective of the value, i..e whether it is below 80, above 20 or in the middle.

There are other ways to use the Stochastic oscillator but the above is the most popular and appears to be profitable. Here is what that looks like as a flowchart. 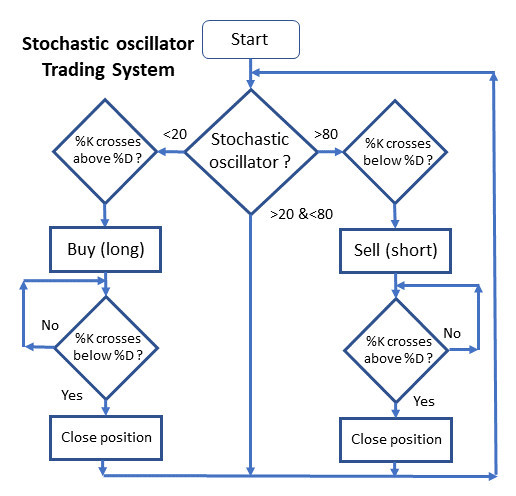 The Stochastic oscillator in action

Let’s look again at the trading signals from the Stochastic oscillator for the ETF SPY for the period 1 February to 21 April 2020.

Let’s remind ourselves what went on during this period. The SPY, which tracks the Standard and Poor’s 500 index had reached an all-time high of $329.08 on 19 February after a long healthy bull market. The world suddenly woke up to the dangers of the Coronavirus and stock market prices dropped precipitously dragging the SPY to a low of $218.26 on 23 March. After this drop of around 35% from the peak, the price just turned around and headed back up again.

The Stochastic oscillator gave the following signals during this period.

The Stochastic Oscillator and the MACD

For comparison let’s look at what trading signals the Moving Average Convergence Divergence, or MACD gave during this period. For an in-depth look at the MACD, check here.

The MACD trading signals were.

The Stochastic oscillator and the ADX/DMI

Let’s also compare with the ADX/DMI trading signals. Here is an article that explains how the ADX/DMI works.

During this period the ADX/DMI gave these signals.

The Relative Strength Indicator, or RSI

For completeness let’s have a look at one more, the Relative Strength Indicator, or RSI for short. Here is an explanation of how the RSI is calculated and how it works.

I should note here that for consistency I am using the RSI with over-sold levels set at 20% and below and over-bought levels set at 80% and above.

As we found in an earlier comparison when examining the ADX/DMI system, the RSI was sort of halfheartedly trying to give an “almost buy” signal around 28 February. For the trading time frames we are considering here, of a few months this would have been a poor place to enter the market.

The Stochastic oscillator vs the others

If we had followed the RSI, we would probably just have ridden the whole of the market slide and return out. So out overall result following the RSI would have been a loss of 14.63%

Here is what the results would all look like side by side.

For this time period, looking at this particular ETF, which is one of the most liquid and high-volume traded equity funds, the Stochastic oscillator actually performed quite well.

Someone who just bought and held for the whole period would have seen a loss of 14.63%. Had that same person used the signals of the Stochastic oscillator that would have been turned to a gain of 16.00%. It is a very limited study but noteworthy even so.

Practical use of the Stochastic oscillator

What is the best indicator to pair with the Stochastic oscillator?

To be honest this is a bit of a trick question. Always the best indicator on any chart is the stock price itself. We should always start looking at the price in a chart and see what the price is actually doing at that time.

Also, there isn’t going to be a simple answer to this question. With all the automated trading going on today, if fortunes could be made using a simple off-the-shelf indicator that everyone has access to, everyone would flock to use it and the market would soon take care equalizing all the gains. We would all be back to market level performance, or likely worse before you know it.

Here is another authoritative source on the Stochastic oscillator.

Answers to some questions

Q. How do you read a stochastic oscillator?

Q. How do you set up a stochastic oscillator?

A. It is best and most usual to set it with 14 periods, the upper range above 80, the lower range below 20, and select, slow, smooth, or 3 and 3 for the moving average settings depending on your platform.

Q. What is the best setting for stochastic?

A. It is best and most usual to set it with 14 periods, the upper range above 80, the lower range below 20, and select, slow, smooth, or 3 and 3 for the moving average settings depending on your platform.

Q. Is stochastic a good indicator?

A. The example we examined here showed that the Stochastic oscillator can successfully indicate price trend reversals.

Q. What are the best technical analysis tools to pair with the Stochastic oscillator?

Here is a single-page summary of the Stochastic oscillator you can download as a PDF. 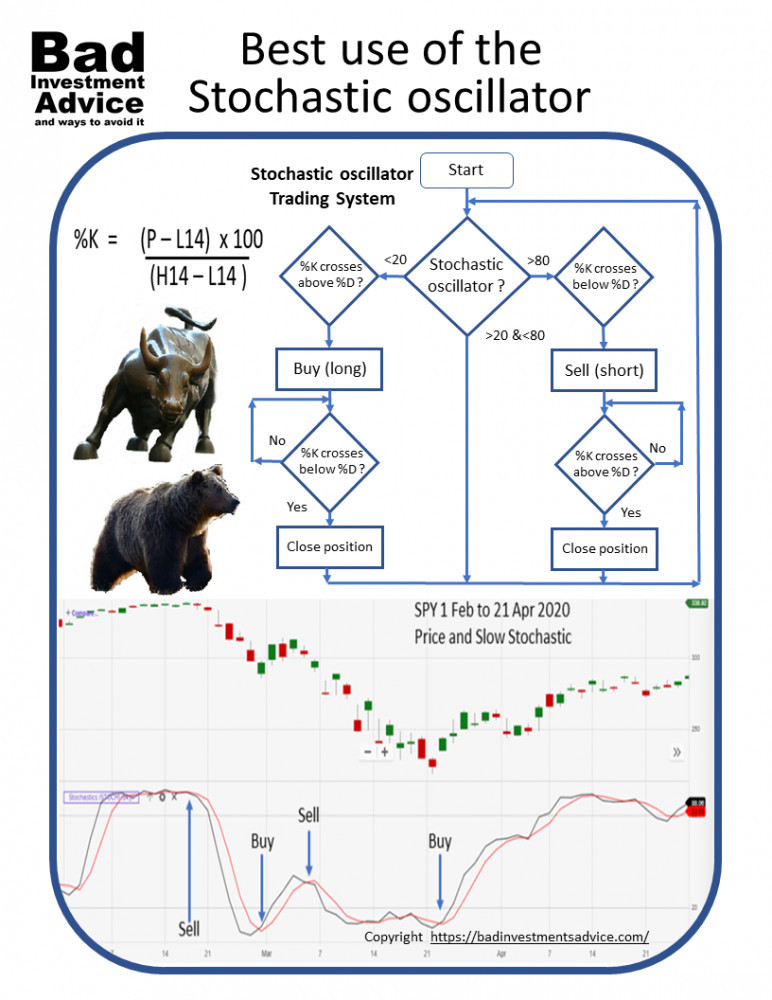 I hope you found this article interesting and useful. Do leave me a comment, a question, an opinion or a suggestion and I will reply soonest. And if you are inclined to do me a favor, scroll down a bit and click on one of the social media buttons and share it with your friends. They may just thank you for it.