Candlestick patterns have been around for hundreds of years. The popular names for the well-known and lesser-known forms come from Japan and were famously used by rice traders in the 18th century.

1)All charts and candle patterns created by https://badinvestmentsadvice.com/

Rather than learning all the multitude of candlestick names and types, it is more important to understand what the candlesticks mean in terms of price movements and what that reveals about the psychology of buyers and sellers in the market.

The parts of the candlestick

Candlestick charts display the prices of a stock or another financial instrument and each candle shows a discrete time period. The easiest period to grasp is a daily period for a stock that trades from the time the market opens to the time the market closes.

Each candle in the chart displays four price points in that daily period:

Candlestick charts can be set up to show price movements over different periods, for example, weekly, monthly or shorter periods of hours or minutes during a trading day. But it is easiest to talk here about daily price candles. 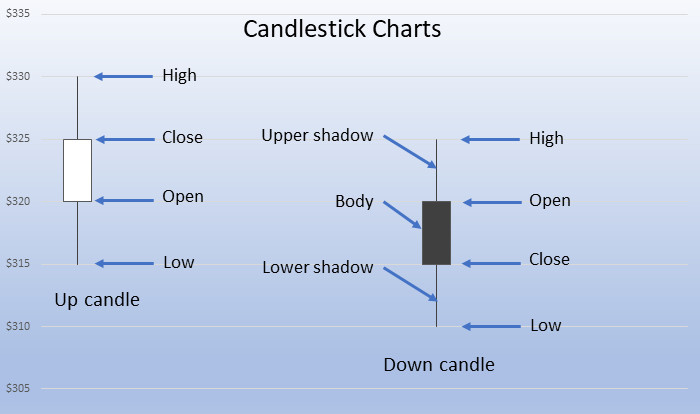 If the upper shadow is large, that tells us there was buying pressure in the market for higher prices but some indecision and selling pressure pushed the price to close lower at the end of the day.

Similarly, if the lower shadow is large, that shows some selling pressure pushing prices lower but then buying pressure resumed and pushed the price to close higher at the end of the day.

Let’s dive in and take a look at some major candlestick patterns.

A doji is formed when a trading period closes at or very near the opening price. The sizes of the upper and lower shadows indicate the degree of uncertainty on the upside and on the downside respectively. 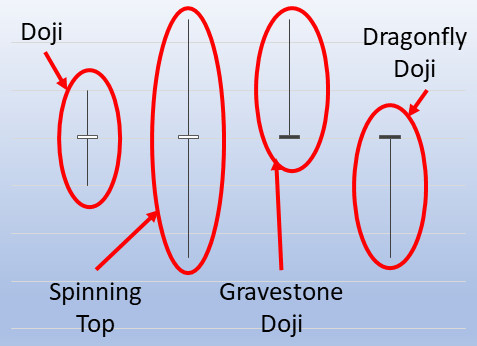 A dragonfly doji at the bottom of a trend is a powerful indicator of a trend reversal to the upside.

A gravestone doji at the top of an uptrend is a powerful indicator of a trend reversal to the downside.

A spinning top doji has large upper and lower shadows and indicates uncertainty in the upward and downward directions and is, therefore, less powerful than another type of doji anywhere in a chart.

Among the strongest trend reversal patterns is the abandoned baby. These can occur either at the top of an uptrend or at the bottom of a downtrend. 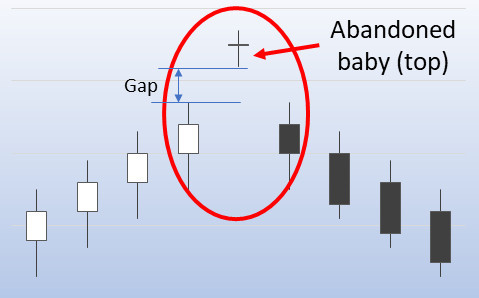 For a doji to be an abandoned baby at the top of an uptrend there must be a gap between the previous candle’s high price and the low price of the baby. When the next candle is a large down candle that opens below the low of the doji and the high of that down candle stays below the doji then the downtrend is confirmed. 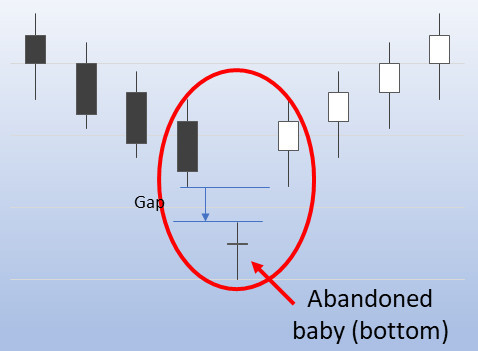 The bullish hammer and the bearish hanging man

The bullish hammer and the bearish hanging man look very similar. Each has a small body with a large lower shadow and either a very small or no upper shadow. The close can either be above the open, so using the display format here, the body can be either white or black. 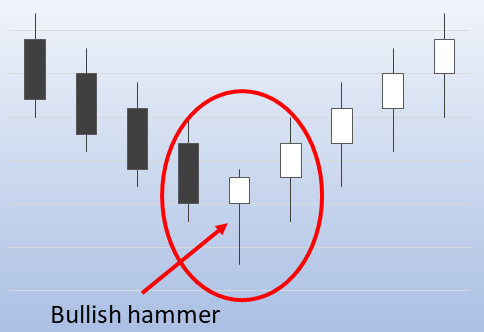 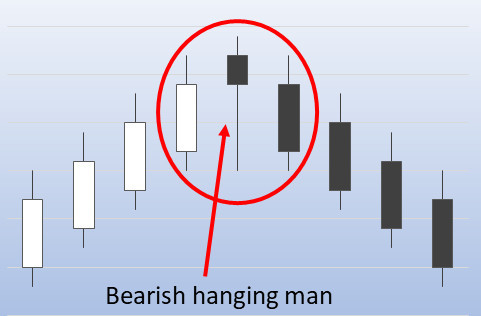 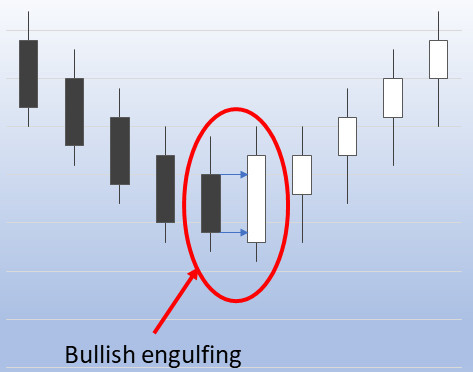 The bearish engulfing pattern occurs at the top of an uptrend. 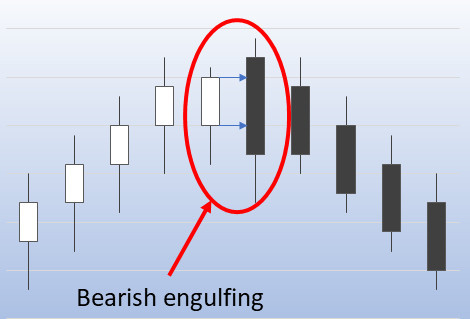 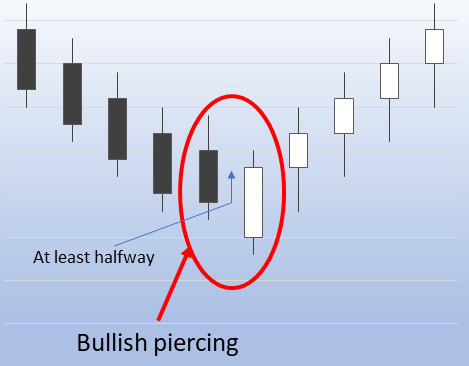 Dark cloud cover is the bearish piercing pattern that occurs at the top of a price uptrend. 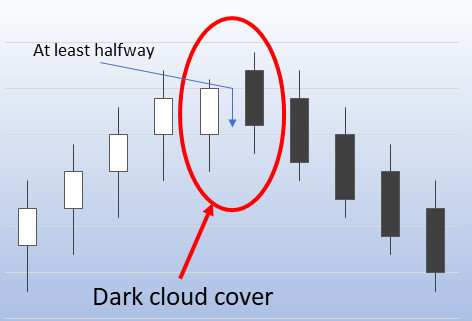 Neither of these candle patterns is particularly strong. If the body of the second candle does not pierce halfway, then it is more likely to indicate a trend continuation rather than a reversal.

A morning star occurs at the bottom of a price downtrend. 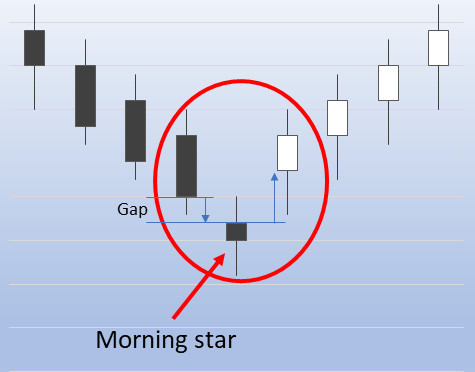 An evening star occurs at the top of a price uptrend. 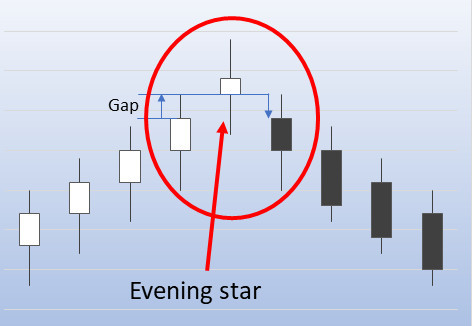 Like with the morning star, if the body of the next candle after an evening star gaps down from the body of the star then it is a more powerful indicator of a price trend reversal in the downward, i.e. bearish direction.

A shooting star occurs at the top of a price uptrend. 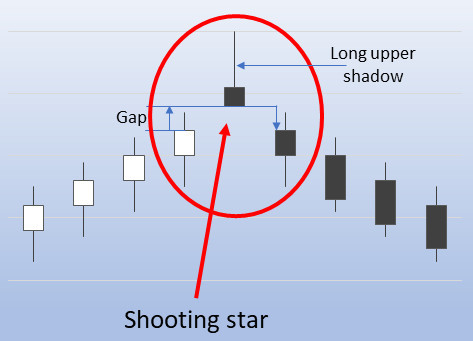 The long upper shadow of a shooting star indicates uncertainty in higher prices. It is an indicator that price is likely to trend downwards.

The inverted hammer also has a large upper shadow. 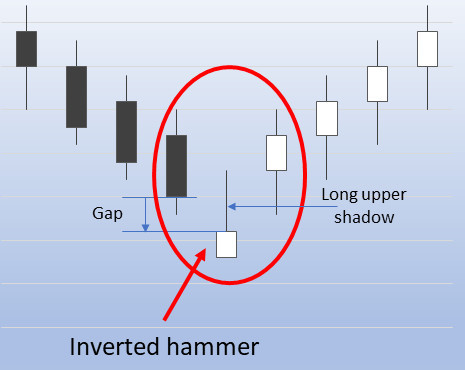 The inverted hammer occurs at the bottom of a downtrend and is not as powerful an indicator of a reversal to price uptrend as a regular bullish hammer.

It is more meaningful in a price uptrend if the mother candle is an up candle, the child candle can be either up or down. 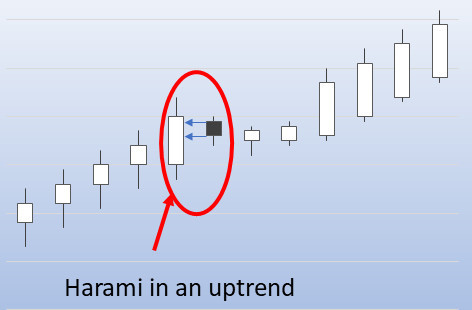 The harami is not a very powerful indicator of the likelihood of a price trend reversal. More usually it tends to stall price. In the example above the harami has the effect of stalling a price uptrend. 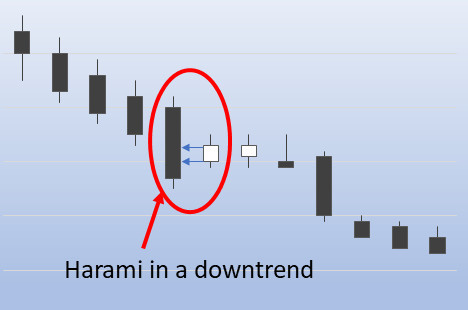 In the above example, the harami stalls the price downtrend. Again, whether the child candle is an up candle or a down candle doesn’t matter that much.

When the child is a doji, then the harami pattern becomes more powerful and is more likely to indicate a price trend reversal. 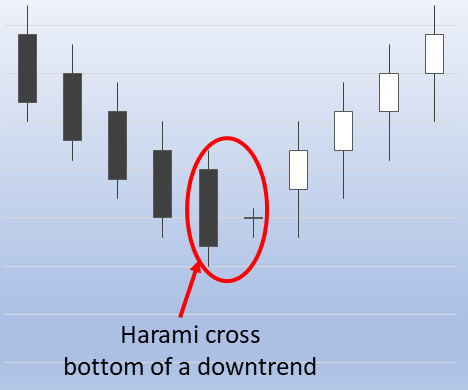 The example above is a harami cross at the bottom of a downtrend. 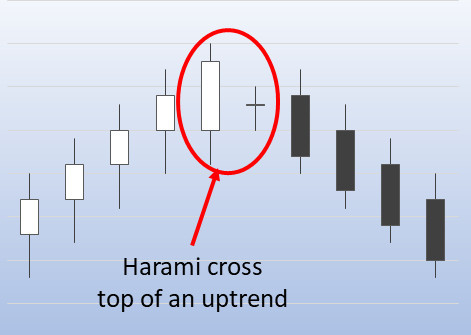 The harami cross at the top of an uptrend is shown above. That the child candle is a doji makes the pattern a more powerful bearish indicator.

The main characteristic of the rising three methods is that there is one large body up candle followed by the smaller body candles all of which are contained within the price high and low of the first candle. The next candle that breaks the pattern in the upwards direction should open at least halfway up the first candle, and close above all the previous candles of the pattern. Here is what it looks like 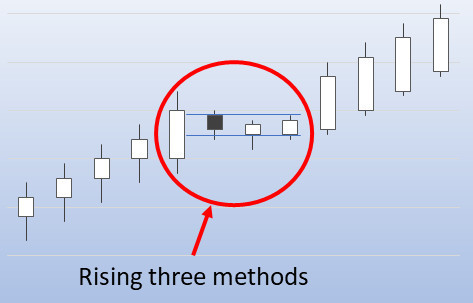 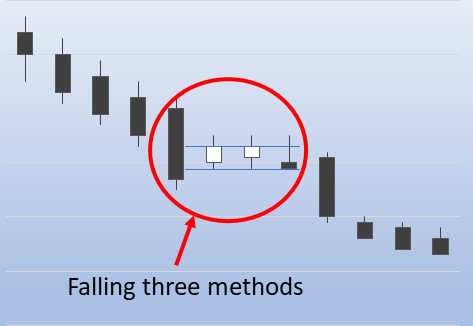 The three white solider pattern can happen at the bottom of a price downtrend or at the end of a period of sideways price movement. 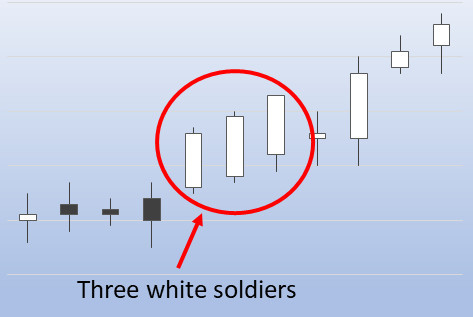 If the closing prices of the candles are not progressively higher than the previous candles, then the bullishness of the indicator is not as strong. If the upper shadows are long then it is also not as strong and indicator. 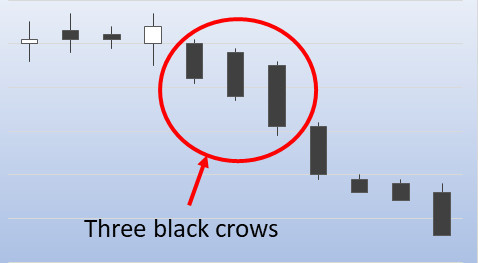 Differences on the upside and on the downside

Generally, bull markets take longer to form and are slower to happen than bear markets. This is largely because of the psychology of traders. It takes longer for enthusiasm and belief in a bull market to form, than it does for fear to take hold and trigger a bear market.

This is also reflected in how we should read and interpret candlestick patterns. Reversal patterns at the top of a bull market will tend to require less confirmation from other indicators, such as volume, the MACD, the RSI, or the Stochastic oscillator, than will reversal patterns at the bottom of a downtrend.

This means as well that candlestick patterns at the top of an upward price trend do not have to be as strong in themselves to indicate a reversal to a bear market. Conversely, when we see a candlestick pattern at the bottom of a trend and we are looking for an indication of a price reversal in a bullish direction, then we will want to see a strong candlestick pattern for it to start to have validity.

Here is an article that explains more about candlestick patterns.

Q. How do you read a stock candlestick chart?

A. A candlestick chart shows the opening price, the highest price the lowest price, and the closing price of a stock in a specific time period when the price changes in a market.

When the closing price is higher than the opening price that is considered an up period and the candle will have a specific color either white or green.

When the closing price is lower than the opening price that is considered a down period and the candle will have a different color, either black or red.

Q. Which candlestick patterns are most reliable?

A. Dojis are the most powerful candlestick patterns. Bearish candlestick indicators tend to more readily follow through with price action than do bullish indicators. A gravestone doji at the top of an upward price trend is probably one of the most reliable indicators that a price reversal in the downward direction is likely.

Q. Which candlestick patterns are most bullish?

A. An abandoned baby doji is probably the most bullish candlestick pattern.

Q. Which candlestick patterns are most bearish?

A. A gravestone doji is the most bearish candlestick pattern.

Here is a single-page summary of the main candlestick patterns available for download as a PDF. 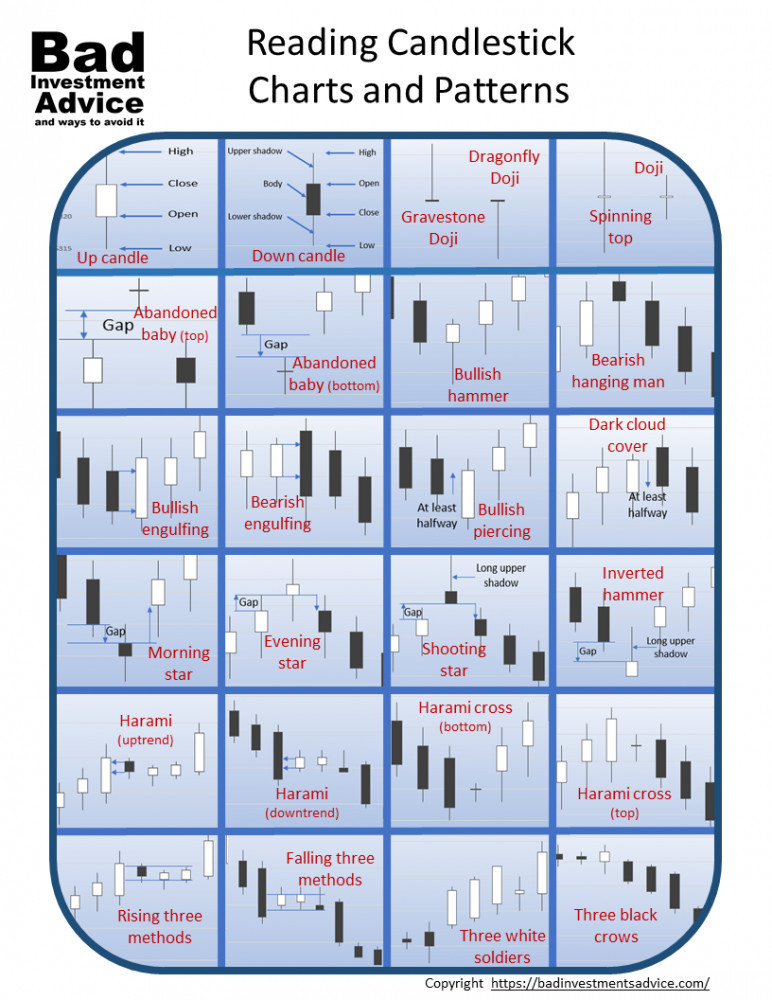 Copy link
We use cookies to ensure that we give you the best experience on our website. If you continue to use this site we will assume that you are happy with it.Ok