Anyone who has invested in stocks for a while will know that the market goes through cycles, not just ups, and downs but distinct phases that repeat. You might also have noticed that certain assets perform better during different market phases. So if you are caught holding assets that do not perform well when the market cycle shifts to a new phase, then you suffer losses. This prompts the question, what are the stock market cycles, and if I could find a stock market cycle indicator could I use this to shift into different assets to benefit from a new market cycle.

It is easy to be bewildered by prices moving constantly up, down, and sideways. It can be more daunting when you are trying to work out when to get in or get out and knowing that there are other traders and investors out there all trying to outwit each other and to outwit you.

When asked by a young investor what he thought stock prices would do, J. P Morgan famously said,

As explored in this other article on technical analysis, one of the main assumptions of the technical analysis approach is that price fluctuations follow discernible patterns. There are indicators that can reveal when a current cycle is about to move into another phase, these are called leading indicators.

There are also indicators that confirm what just happened and that it is continuing to happen in the markets. These are called lagging indicators. 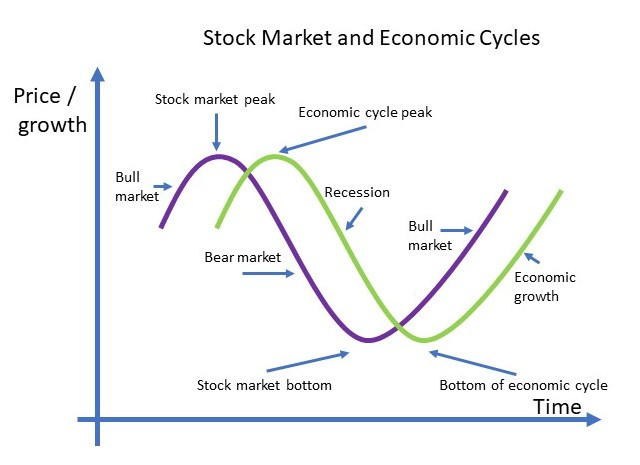 That’s great if you are in business trying to decide whether the economy will be favorable for a new venture or product launch but it’s frustrating if you are an investor or trader wondering what moves to make in the market.

The first person to document a theory of market price cycles was Richard Wyckoff way back in the late 19th century and early 20th century. He noticed four distinct phases, accumulation, markup, distribution, and markdown. Here is what Wyckoff’s model looked like. 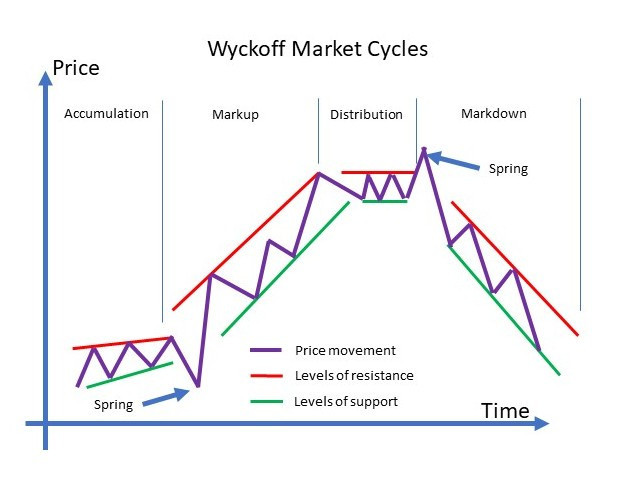 As the chart shows, prices move between levels of support and resistance during each phase. After testing the levels of resistance a few times buyers gain the upper hand and the price breaks through from the accumulation phase to the markup phase.

A similar pattern is seen at the end of the distribution phase, after testing support levels a few times, sellers eventually win and breakthrough and the markdown phase starts.

Who drives the market?

There is an important fact to remember.

The best the small investor can hope for is to gather some crumbs that may fall from the banquet table where the institutions are feeding.

If that invokes images you may have seen in movie versions of Charles Dickens Oliver Twist when the hungry orphans look longingly at the board of governor’s dining table – sorry for the melodrama but that’s about right.

Accumulation – the accumulation phase starts after the market has reached the bottom following a decline that has wiped out everyone who is selling out. At the very market bottom, the predominant emotion is despondency.

The early buyers entering during the accumulation phase are the smart money investors. The public mood shifts from despondency to depression still not ready to believe in the price upswing as the dominant stories in the media are about the ongoing recession.

At some point with mounting evidence of rising prices, the media takes more notice and reports the end of the recession. Wyckoff theorized that there is a big selloff where the last sellers give up and sell out. That is a spring point that looks like a break to even lower prices but actually, buyers are winning.

The cycle moves into the next phase and the public mood shifts from depression to hope.

Markup – as media attention reinforces the perception that the recession is clearly over, the economy is growing, the bull market is in full swing, the public mood transitions from hope through relief and then into optimism.

Most of the money now entering the market is institutional investors getting back in or building themselves stronger positions. Now we are really in a solid bull market. Optimism becomes excitement and prices continue their relentless climb.

Eventually, we approach the end of the markup phase. The overwhelming evidence of prices going ever higher turns excitement into thrill, now many smaller, new, and less experienced investors start jumping into stocks trying to not miss the boat.

The public mood of thrill gives way to euphoria. Most of the smart money will have left by now. Finally, all the indicators show that the market is overbought and the big institutions decide that the bull market has run its course even though the economy is still growing.

Distribution – as the sellers take over they start to dominate the market. Again like at the end of the accumulation phase there is one final buying spurt but the big institutional money is selling so the distribution phase tips the market into a downtrend. Euphoria is replaced by anxiety.

Markdown – The full bear market is now confirmed. Sellers still dominate and drive prices even lower. Small and inexperienced investors who bought in during the bull market are wondering what they got themselves into.

This is when a big selloff comes. Ever declining prices push the general mood from anxiety through denial, then fear, and later desperation. Some small investors are still holding on but prices continue to push lower.

Desperation finally gives way to capitulation and the last of the small and inexperienced investors sell out. By the end of this phase, everyone who is selling eventually sells right at the bottom.

At this point when the bottom is reached, the sellers have run their course. All the indicators are showing that the market is oversold. Another phase of accumulation starts.

How long the cycles last

If we examine the historic data, taking the Standard and Poor’s 500 Index as an indicator for the market, we see that bull markets last longer than bear markets.

Here is what those bull and bear market periods look like on a timeline from 1926 to 2019.

Footnote1)The historical data for the S&P 500 annual returns, were taken from this site. All calculations and charts here were made by Bad Investments Advice for this article.

As we can see the public mood progresses slowly at first through the positive emotions but has much less time to adjust from the euphoria of a market peak to the capitulation close to the subsequent market bottom.

Something else to notice on this chart is the clearly visible Bear Trap and Bull Trap which typically occur early on in the Markup and Markdown phases respectively.

Early on a bull market, there can be a correction in the form of a sudden price drop. This can be a trap to bears who misread the signal and start for example short selling the market. However, if the short-term price correction is reversed and the market continues on the uptrend and short sellers will lose.

A similar situation can arise in a bear market. Early on there can be a short correction and prices suddenly rise again. This can be a trap for bulls who may be tempted to reenter the market taking new long positions. If the general downtrend continues the bulls will find themselves on the wrong side of the market.

Where are we right now

This is where we think we are right now in early June 2020.

On one hand, we know that the world economies are likely going to see difficult times ahead because of all the impacts of the coronavirus. We are likely to see recessions in many economies for the next few years.

On the other hand, there still seems to be investors in the market and central banks around the world are doing their best to learn the mistakes of the early 1930s and have drastically eased monetary policies.

I think this points to a period of price volatility and the rise we saw in April and May is looking more and more like a classic Bull trap.

Leading indicators for the stock market

One of the most reliable leading indicators for the stock market was noticed by Joe Kennedy back in 1929. Mr. Kennedy was having his shoes shined and the young boy shining his shoes started to give him stock tips.

At that point, Mr. Kennedy realized he had to sell his stocks and leave the market fast because it had become too popular for its own good. He did just that and was able to avoid most of the carnage of the ensuing market crash.

Others have made similar observations in later years noting that when hot tip stock market investing becomes common conversational currency among the inexperienced public, that is a sign to pack up and leave like Joe Kennedy.

It has often been said that there is no better investment than your own financial education. One great way to accelerate your financial education and your investing success is with the American Association of Individual Investors, the AAII. When you join the AAII, you get access to reports, courses on investing, risk management, asset allocation, retirement planning, managing retirement finances, and other resources, all for a single annual membership fee. I hope you found this explanation interesting and useful. Do leave me a comment, a question, an opinion or a suggestion and I will reply soonest. And if you are really inclined to do me a favor, scroll down a bit and click on one of the social media buttons and share it with your friends. They may just thank you for it.

Disclaimer: I am not a financial professional. All the information on this website and in this article is for information purposes only and should not be taken as investment advice, good or bad