What is Fibonacci sequence stock trading, does it work and why do traders use this method and what if anything does it have to do with the golden ratio? These are all good questions that we will look into here.

The golden ratio or golden mean

OK this is a topic I could get lost in. But fear not. I will control myself and do my utmost to stick to the point.

Mathematicians in ancient times, which back then meant most clever people, noticed that a particular number and ratio kept cropping up in nature. Artists and architects famously made use of this ratio between the main vertical and horizontal elements of their works as it was naturally pleasing to the human eye. This ratio was known as the golden ratio, or the golden mean and expressed in numbers is

This ratio is usually represented by the Greek letter phi. The proportions of phi, the golden ratio, and its formula are shown here. 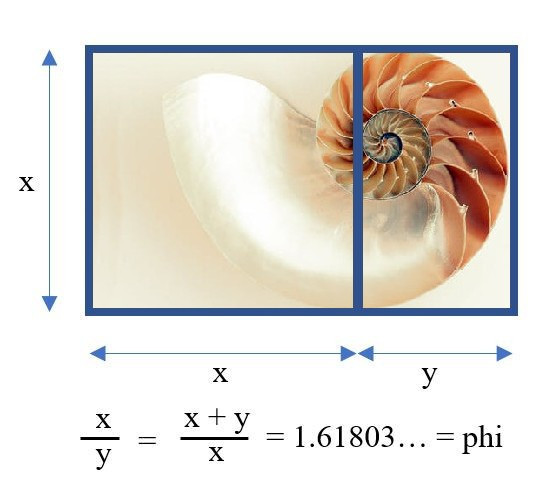 Parking the golden ratio to one side for the moment, in the year 1202 Leonardo Fibonacci wrote a book that included a sequence of numbers, starting with zero and 1, where the next number in the series is the sum of the previous two numbers. The start of the Fibonacci sequence is as follows.

The formula to generate this series is

How the Fibonacci sequence connects with the golden ratio

If you are wondering what all of this has to do with stock trading, we’ll get to that soon.

Well without going into any more of the maths or getting into detail the implication is that the Fibonacci sequence is a natural sequence of numbers that shows up all over nature. By that, I mean in the repetitive fractal patterns found in ferns, snowflakes, and seashells just to name a few.

We still haven’t got to trading stocks yet I know but we are nearly there.

The Fibonacci series of numbers can also generate a further series of ratios from within itself.

You take a number some way into the list, say the 50th number. You use that as a denominator then calculate the ratios of the earlier numbers in the sequence in relation to that number. We end up with a sequence of ratios that also converge to the same numbers the higher up the sequence you go. This is easier to see in a table. 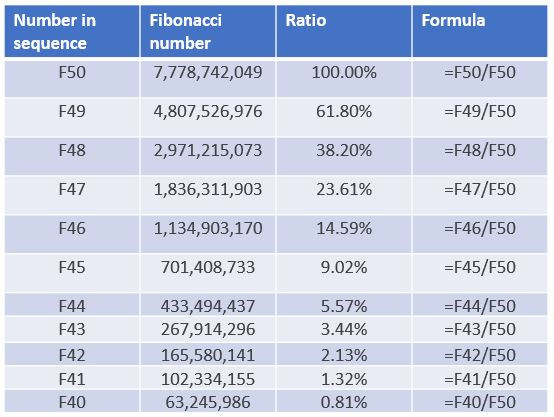 These are the Fibonacci percentages used in Fibonacci retracement trading. The ones most used are

Why and how does this work?

Since the Fibonacci numbers are used in nature, this also applies to human psychology. And since human psychology drives supply and demand for stocks on exchanges, these ratios show up in percentage relationships between successive levels of price support and price resistance in a traded stock.

OK, I’ll admit the “why” is a little flimsy. So let’s look at the “how” instead.

I guess at some point hundreds of years ago when clever people weren’t called scientists but natural philosophers. So these natural philosophers were studying market price movements, knowing how Fibonacci numbers appear all over nature they would logically look to find evidence of Fibonacci numbers in stock price movements and particularly price reversals.

Like so much in technical analysis, word got around about some clever trader using Fibonacci numbers to predict price movements. Everyone else started to do the same and so it became a self-fulfilling prophecy. 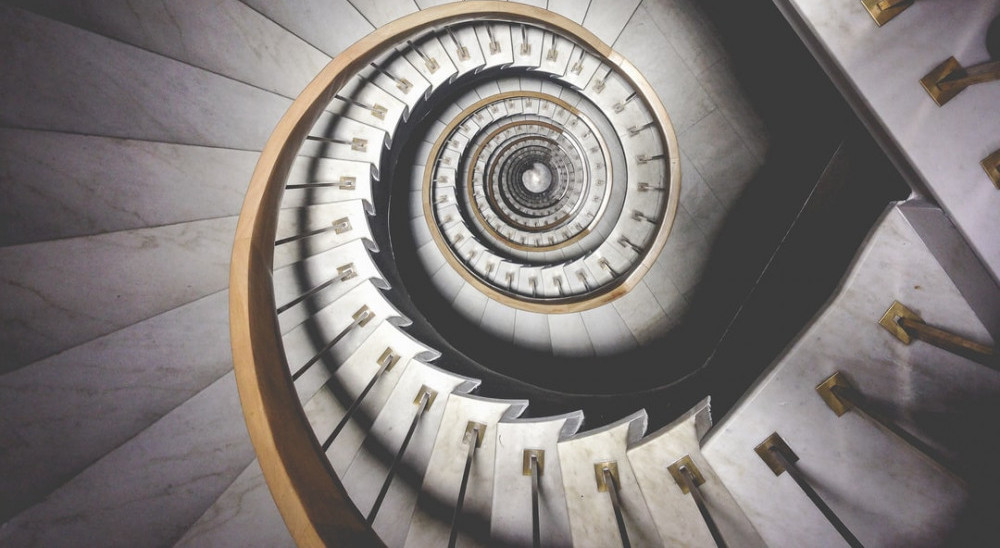 To test this out we’ll use the State Street Global Advisors Standard and Poor’s 500 index-tracking ETF which goes by the symbol SPY. If we cast our minds back to around 25 March 2020. We had seen the SPY hit an all-time high in February and the SPY hit a high of $334.89 on 19 February 2020.

Since then the index had a precipitous fall to a low on 23 March and SPY closed on that day at $221.97. Watching trading volume we just saw two days of what looks like a reversal, most of the sellers have been shaken out and the market looks like it might be starting to climb back up. SPY closed on 25 March at $245.71.

Assuming we were watching this closely this is what we would have seen at this point in time. 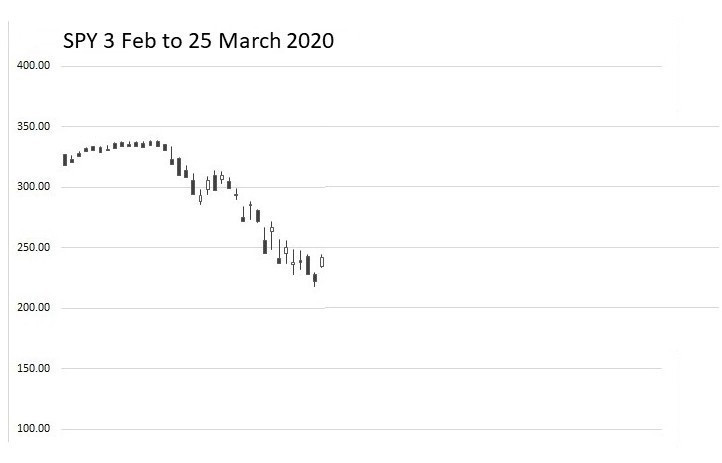 If we decide it is time to buy we would want to know where we think the price is headed before it is likely to hit resistance again. This is where the Fibonacci ratios can be used.

Assuming we had decided to buy at this point, we would be looking for price resistance at the Fibonacci levels. Here is what happened next.

Here we can see already in early April the price seems to have hit resistance at the 38.20% level. We could opt to sell and take profit at this point, or ride it further and hope. Or better watch the volume and other indicators to inform a decision.

Here is what happened next. 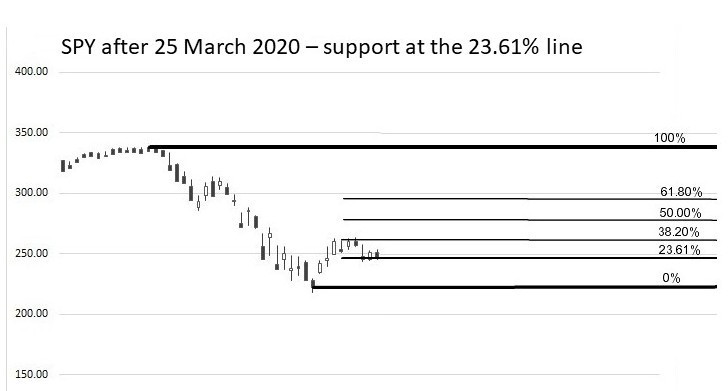 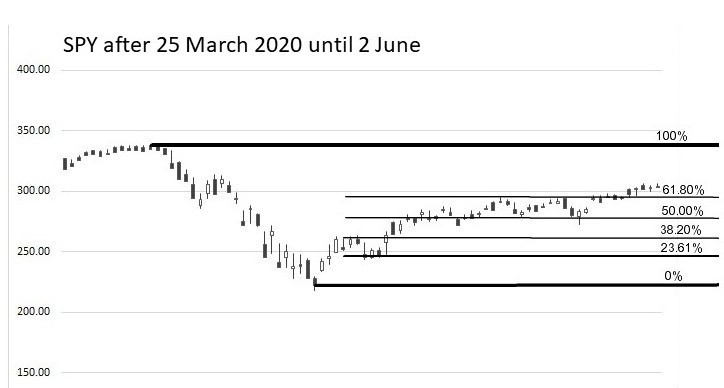 What Fibonacci levels mean for trading

The use of Fibonacci ratios as demonstrated here is referred to as Fibonacci retracement levels. It refers to the fact that the price is projected to meet resistance and support levels in a range where it previously traded.

Traders want to know the projected levels of resistance and support as being price points to either exit or enter long positions or enter and exit short positions respectively.

Other graphical uses of Fibonacci

Here we used the Fibonacci ratios to draw horizontal price levels which were met at some point in the future when the price moved to those levels. The same Fibonacci ratios can be used to chart in arcs around key price events and when price patterns are showing signs of convergence or divergence. This adds the factor of time into the projections.

But more on that another time.

We saw here in this example that it did work, some of the time. But there were also price corrections that happened at other price points in between the Fibonacci levels, so the method does not appear to be infallible.

As I said before, a lot of this is going to be self-fulfilling prophesy because so many traders are setting market orders according to Fibonacci levels.

What strategies work with Fibonacci ratios?

Many trading strategies work with Fibonacci ratios. The Fibonacci levels are best used with other indicators such as MACD, volume, and the relative strength index. Like all indicators, they have their weaknesses and should not be relied upon without noting what is going on in the broader market.

Fibonacci levels are best used to point towards likely price corrections, trend reversals or price bounded within a range.

Are ready to get serious about investing in your own financial education? Then check out membership of the  American Association of Individual Investors, the AAII.

The AAII is a nonprofit organization, dedicated to the financial education of its members. Your membership of the AAII will give you access to courses and resources on stock investing, financial planning, and how to manage your retirement finances. Here is a single-page summary pdf on Fibonacci retracement percentages. 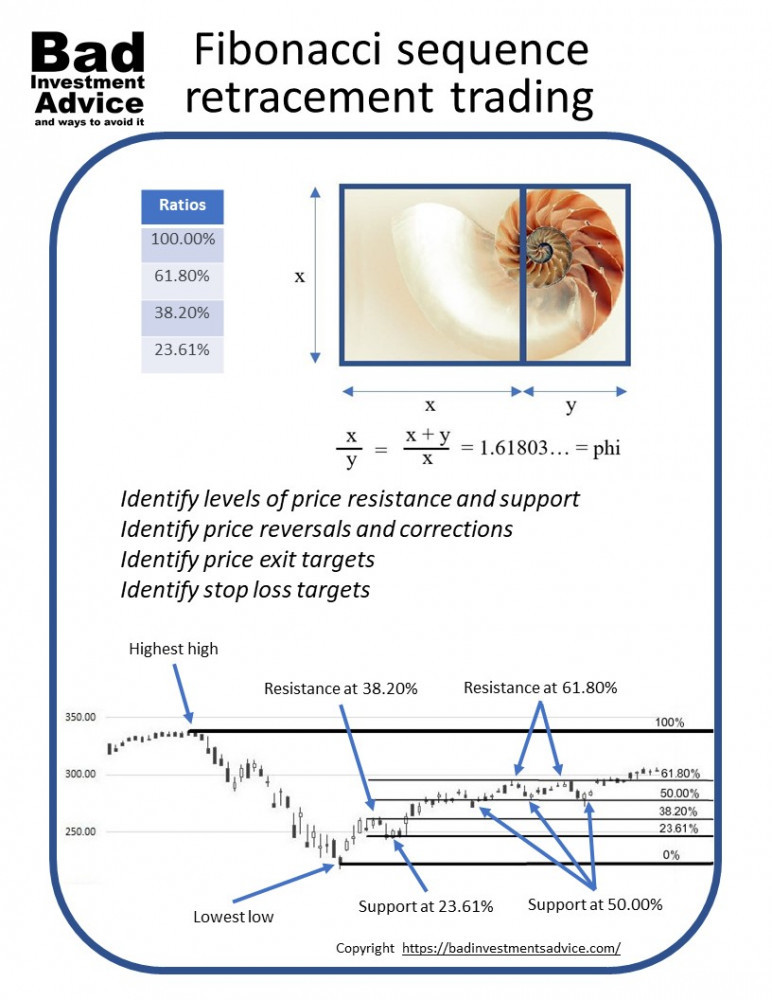 I hope you found this article interesting and useful. Do leave me a comment, a question, an opinion or a suggestion and I will reply soonest. And if you are really inclined to do me a favor, scroll down a bit and click on one of the social media buttons and share it with your friends. They may just thank you for it.