Those of us with portfolios strong in technology stocks and healthcare might have been wondering what was going on with the markets in the week immediately after the November 2020 US presidential election.

We all sat and stared while the Dow Jones Industrial Index and the Standard and Poor’s 500 Index jumped 3, 4, 5 percent last week while the value of our portfolios may have dropped, even precipitously depending on what you were holding.

So what happened we could ask ourselves?

Market pundits and commentators came up with other suggestions that the market was shifting away from – stay at home stocks – and moving into – back to work stocks. Other ideas were that with a Democrat in the White House, the likelihood of regulation of big tech came a step closer. Alternative energy would also see a boost etc.

All that is very interesting, but an argument could be made, however, that it doesn’t really matter what the big institutions are deciding and basing their rationale on. It only matters what they are doing. In other words, it only matters which sectors and industries they are divesting from – and here is a hint – you don’t want to be in those…

What are sectors and industries?

Here is an explanation of how the Global Industry Classification Standard divides sectors into sub-sectors and industries.

The 11 sectors in approximately descending order of size are:

As I said above, this is an approximate order in terms of size and by size, I mean market capitalization. However, as we will see, in each bull market certain sectors tend to grow more than others, and over time the relative weighting of the sectors changes. Also, sub-sectors and new industries emerge and become more important so how we call the main sectors and the sub-sectors and industries that make them up will also change over time.

Now that we’ve identified the sectors, the important point is that bull markets tend to be led by one or more sectors, other sectors sit somewhere in the middle while yet other sectors lag behind or even decline.

Every so often there will be a shift in the ranking. For whatever reason, one sector will fall out of favor and drop behind while others will move up the ranking. Let’s look at this by examining the relative performance of some sector ETFs compared with the Standard and Poor’s 500 index over the last five years to 14 November 2020. The sector ETFs we will use, all from SPDR.

OK, that isn’t so easy to see what’s going on. But just look at the last column. 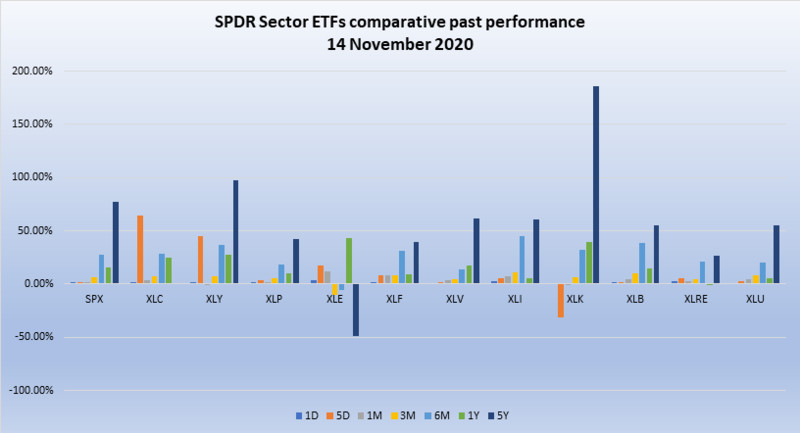 What jumps out to me is that there is some consistency in which sectors performed well over all time periods and some inconsistencies. Some sectors have patterns that match the index as shown by SPX and some are very different.

Here is another way to look at the comparative performance of sector ETFs plotted against the S & P 500 index this time over a 200-day period from 4 February to 16 November 2020.

Over this specific 200-day period, the S & P 500 returned around 12 percent, the Information Technology sector returned 25 percent and the Energy sector lost around 29 percent.

Flatten out the index – relative performance

Another and potentially more illuminating way to look at these is to compare each sector ETF using the whole market ETF, i.e. SPX as a constant reference.

This is achieved mathematically by just dividing the price of each sector ETF by the price of the S & P 500 index ETF.

Of course, this way of looking at these ETFs isn’t going to tell you how they perform if you were to just buy and hold each one. But the relative performance view gives a clearer picture of which sectors are the strongest at any point in time. 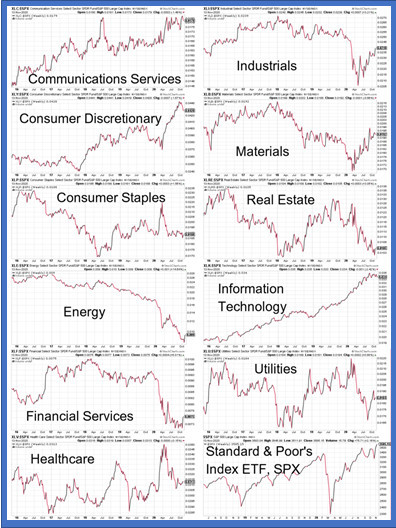 I’ve included the S & P 500 index ETF, SPX in the bottom right-hand corner for reference. The way to look at each of these is to imagine that in each of the 11 ETF sector charts, the S & P 500 ETF would plot as a horizontal line starting from a point on the left-hand side of each chart.

To illustrate this point here is the SPX plotted on the Financial Services ETF XLF.

What this shows is that taking November 2015 as the reference point, from then on ignoring short-term blips, the Financial Services sector, XLF underperformed the S & P 500 until around the beginning of July 2016 when it started to trend upwards and was outperforming the S & P 500 until around December 2016 when it started underperforming the index again. Yes, there were some irregular blips that often lasted a month or so. Whether as an investor you pay attention to those shorter-term movements would be a question of your investing or trading style.

It is important to remember that all 11 charts are showing relative performance. It will always be important to know what the general market is doing. If a particular sector outperforms the market by say 10 percent over a 6-month period, but the market itself dropped 15 percent in that time, then that sector will still have lost 5 percent.

Here we get to an important consideration. The best way to ride a bull market up is to be in the strongest sectors. The investing method known as sector rotation involves monitoring the relative performance of market sectors and periodically switching out of the weaker sectors and into the stronger sectors.

That is a simplified way of looking at it. Sector rotation can be used in many ways but the same principle holds.

You can adapt sector rotation for a slow and steady buy and hold approach. In such a case you might hold the top four sector ETFs and every six months, or even every year just rotate your holdings into whichever are the new top four sectors assuming there has been a change. For example, if three of them are the same and only one has changed then you will only need to swap out your holdings in that one sector fund and keep the others. You would probably want to rebalance your holdings between the four funds as well periodically.

At the other end of the scale, you can use sector analysis to find the strongest stocks in the strongest performing sectors and hold those positions until they lose their leadership position and move on to the next set of strong stocks.

Something else to notice.

If we look again at the S & P 500 index plotted from 4 February to 16 November 2020, we will remember the dramatic bear market pullback of the month of March.

If you were a nimble trader you would have made more money trading the downside of the Energy sector during the bear market than if you had stayed in the strong sectors or in the general market.

Other considerations – equal or cap-weighted

Are all sector funds equal? Probably not. One of the big drawbacks of the large headline market indexes is that a few big, or rather mega-cap stocks dominate the indexes. This is more the case for the Dow Jones Industrial Average which just sums the stock prices of 30 large stalwarts, adjusting the mathematical result for stock splits. This explains how this index is calculated.

You have to ask yourself when you follow the S & P 500 index, is this really what the overall market is doing? There are good reasons for saying no it isn’t.

If you hold a portfolio of stocks the chances are you have a system that involves using a constant or near-constant position size in order to manage your risks. There are good reasons for this and this is what the large majority of investors do. Given that this is the case, you have to ask whether watching the main market indexes is really giving you a good idea of what the overall market is doing. The simple answer is that no they don’t and not in a way that is comparable with your portfolio.

More valid comparators for most investors’ portfolios are equally weighted indexes rather than market cap-weighted indexes. The same rationale applies to sector ETFs.

So when you are looking for a sector or specific industry ETF you should check whether the stocks composing the fund are market-cap or equally weighted. Most funds have some weighting whereby the larger cap stocks are held in larger proportion, so you will find this isn’t a precise science. But you can still look for a fund where the weighting is less pronounced. This way you will be investing with eyes wide open and understanding the implications and how you should evaluate performance against other holdings or benchmarks going forward.

Q. What sectors are the best to invest in?

A. Yes, sector funds are a good investment as you can then select the funds of the strongest sectors.

Q. Why are sectors important?

A. Sectors are important because the stocks that belong to a specific sector tend to perform in tandem. If a particular sector is favored by investors then that favor tends to be shared by all stocks in that sector to a greater or lesser extent. The reverse is also true. If a particular sector is out of favor then all stocks in that sector are likely to suffer the same fate.

Here is a single-page summary of sector investing you can download as a PDF. 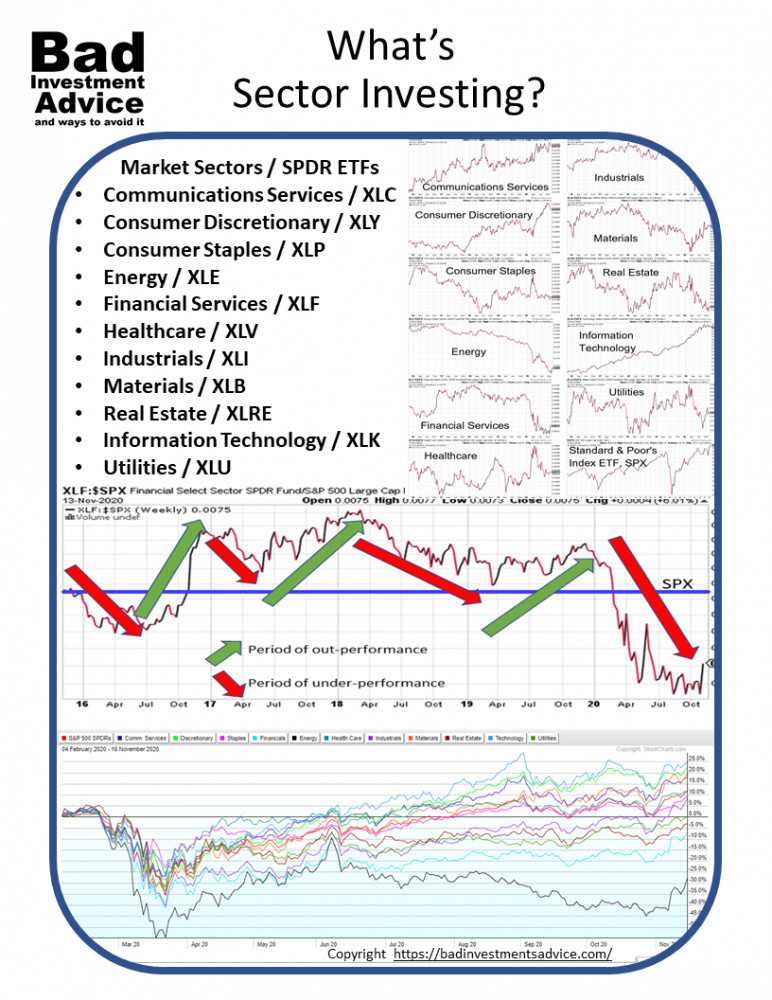