What have the stock market returns for the last 30 years been and how has that changed over time. Can we expect that the current economic meltdown will change accepted wisdom and have us all fleeing into bonds, real estate, gold, or bitcoin?

Having said that, it never ceases to amaze me just how many people I know are nervous of the stock market and view it as a dangerous and risky place to invest. It’s doubly strange when these same folks are in it for the long haul. Especially as once your investment horizon exceeds 15 years, there is no period when stock market returns didn’t beat bonds and other mainstream investments,

But I guess when it comes down to it either some people are impervious to reason and blinded by an irrational fear of any downturn and paper loss of capital value or they are fully justified in maintaining a consistent, conservative risk-averse investing approach.

How the stock market has done over time

Here are the annual returns of the stock market from 1928 to 2019 as measured by the Standard and Poor’s 500 index, abbreviated to the S&P 500 represented by the blue line. 1)The historical data for the S&P 500 annual returns, the 10-Year US T-Bonds annual returns, and the annual US inflation rates were taken from this site. All calculations and charts here were made by Bad Investments Advice for this article.

Since we are looking here at investing rather than day trading we need to consider performance over longer periods.

Here is what those returns look like when taken over successive preceding 30-year periods. As the data before 1928 is less reliable, the previous 30-year return line in our chart starts 30 years later i.e. in 1957. The blue line is still the annual returns of the S&P 500 while the steadier gray line shows the average return over the previous 30 years.

This paints a much more stable picture. But how did the stock market perform with respect to bonds for example? In the years leading up to during and after World War II, government bonds were a popular savings vehicle for private individuals, as I Iearned growing up.

This is how the returns of the Standard and Poor’s 500 index compared with the annual returns from 10-year US Treasury, or T-Bonds looks like.

We can see that the annual returns on the 10-year T-Bonds didn’t dip into negative territory quite as much as the S&P 500 index but it still moves up and down dramatically. On an annual basis, either of these investments would be a bit of a wild ride.

If an investor were choosing between the extremes of the stock market, as measured by the S&P 500 and government bonds using 10-Year US T-Bonds as a benchmark what would the long term performance of each look like.

We can see that over a 30-year investing horizon the stock market was still a more attractive place than government bonds, at least for the period over which we have reliable data.

Just for fun, if we were able to start the clock in 1928 and had $1,000 to invest, what would be the outcome if that had been invested in the stock market compared with 10-year US T-Bonds. 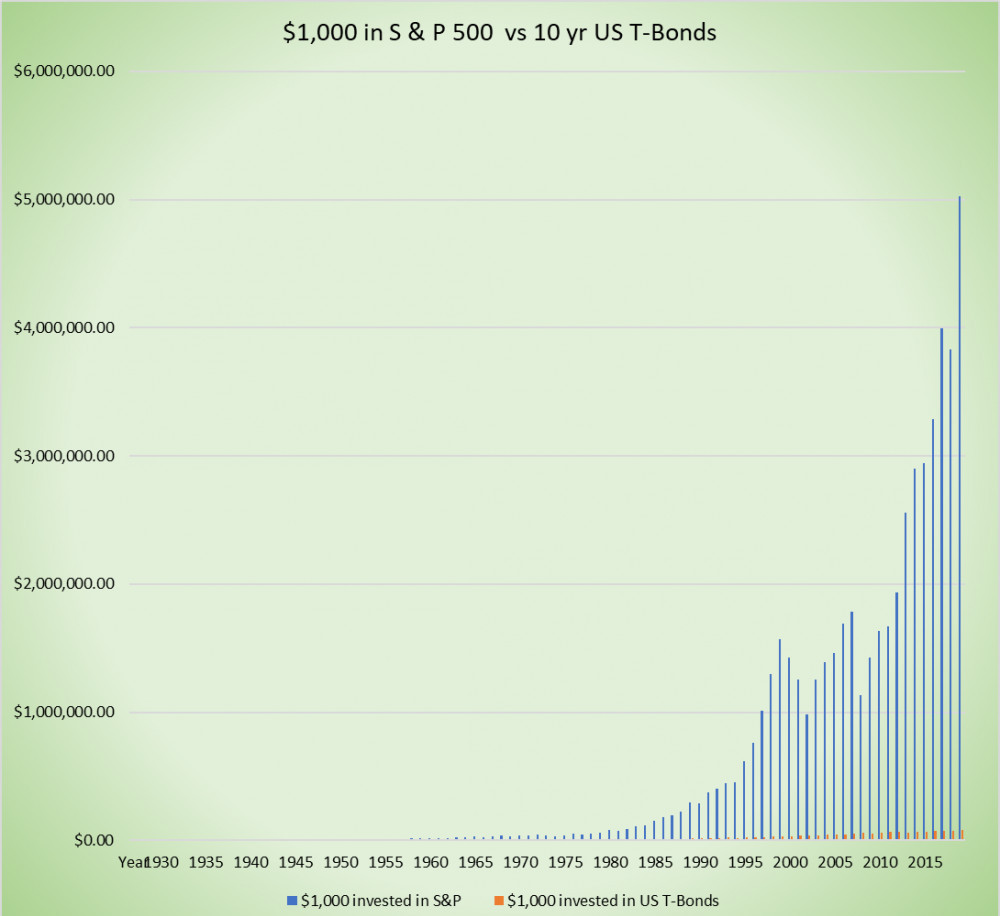 As you can see the stock market investment would result in around $5 million today whereas the government bonds would yield less than $100,000.

To be fair that’s almost like asking if you could have invested a single penny at the time of the birth of Christ, how bit a lump of gold would you own today. Unless you had a very generous and prescient great-grandfather, investing a single sum for a single individual over a 90-year period is, let’s say unlikely to happen.

Let’s take a look at how each of these investments would perform over a rolling 30-year window of time.

In the first case let’s imaging you had $10,000 to invest, maybe an inheritance from a relative or a generous gift to get you started. You could choose to invest either in the stock market or in government bonds.

And to make the numbers a little more real, let’s assume that capital gains tax of 25% was applied to both cases. We will also carry forward any capital losses.

Here is what we’d see.

The blue bars of the $ sums we’d end up with if we invested in the stock market while the orange bars show the result of government bonds.

That looks to me like a fairly convincing case for the stock market.

The S&P 500 beats 10-year US T-bonds for every 30-year period we know about. The closest government bonds came to the stock market was in the 30-year period ending 2008 when the S&P returned $99,928 and the 10-year T-Bonds would have returned $75,005. At all other times, bonds returned roughly half of what stocks returned.

Not all of us have generous relatives so let’s consider a case of a steady investor.

Here we are assuming that we have $1,000 a year to invest either in the stock market or in government bonds. Again to make the numbers more realistic we apply a 25% tax on capital gain and carry forward any capital losses. This is what we get. 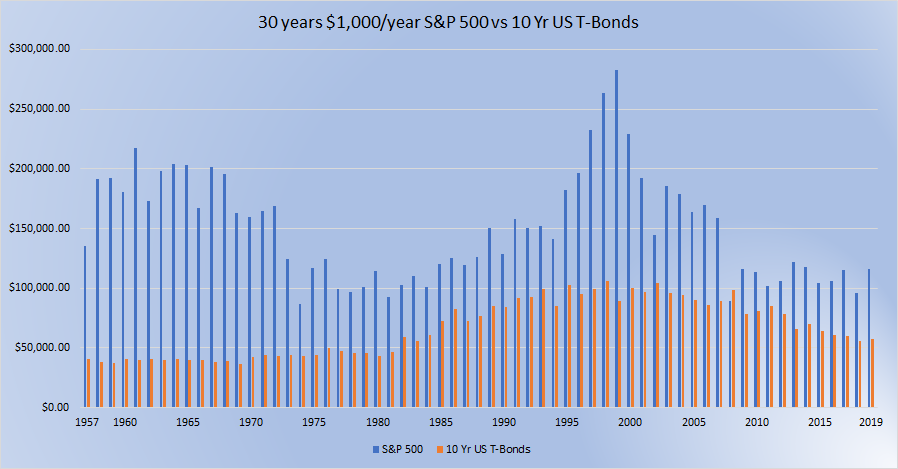 Again we see that the closest they come was for the 30-year period ending in 2008. Over that period the S&P returned $89,433 and the 10-year US T-Bonds returned $98,100. So in this case investing in bonds would have beat the stock market.

Inflation is one of those certainties in life, much like death and taxes and about as popular.

Investment vehicles react differently to inflation, some are inflation prone while others are inflation resistant like gold is supposed to be a hedge against inflation but as we are only concerned with results, that isn’t the issue here. To learn more about inflation, check here.

This is what US inflation did over our time window in question. 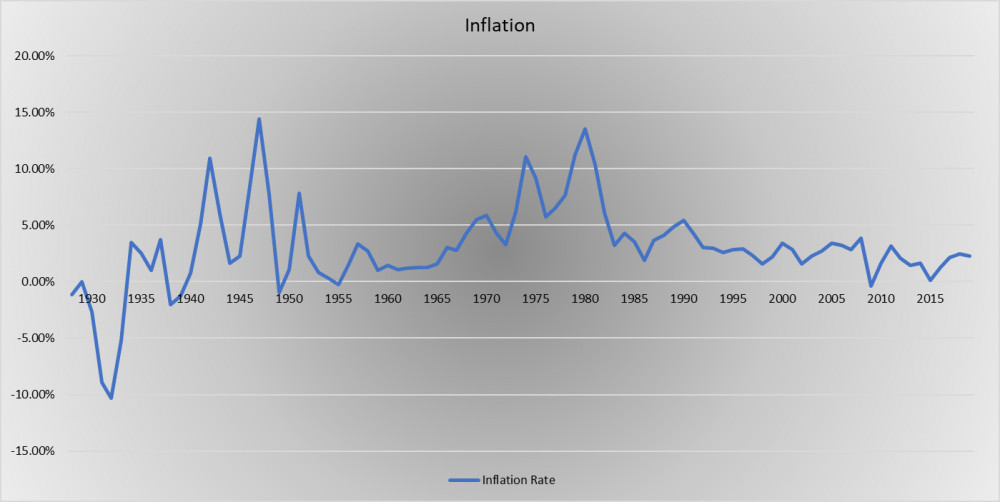 Deflation in the 1930s following the 1929 stock market crash and into the early years of the great depression. High inflation during World War II and high inflation again coinciding with oil crises in the 1970s and early 80s. 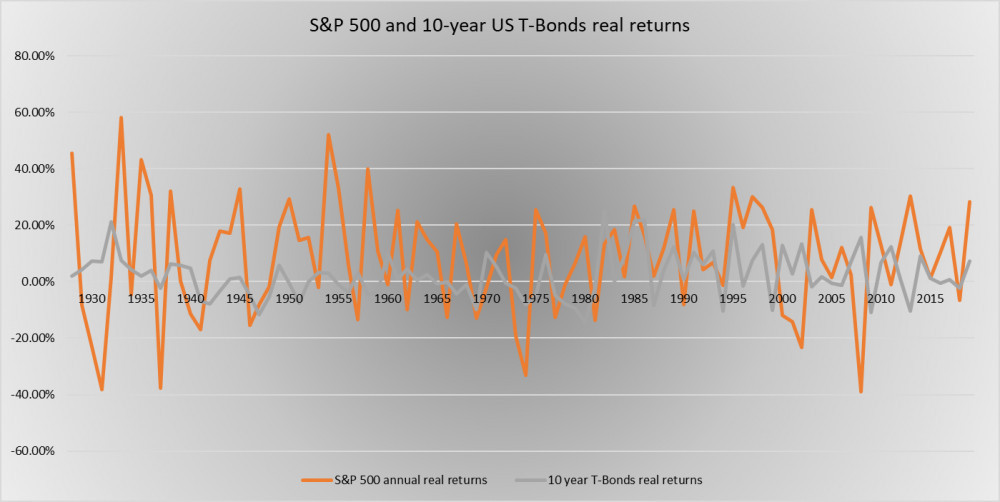 The next question would be what is the effect of inflation in the long-term, in our case 30-year returns. This is what that looks like 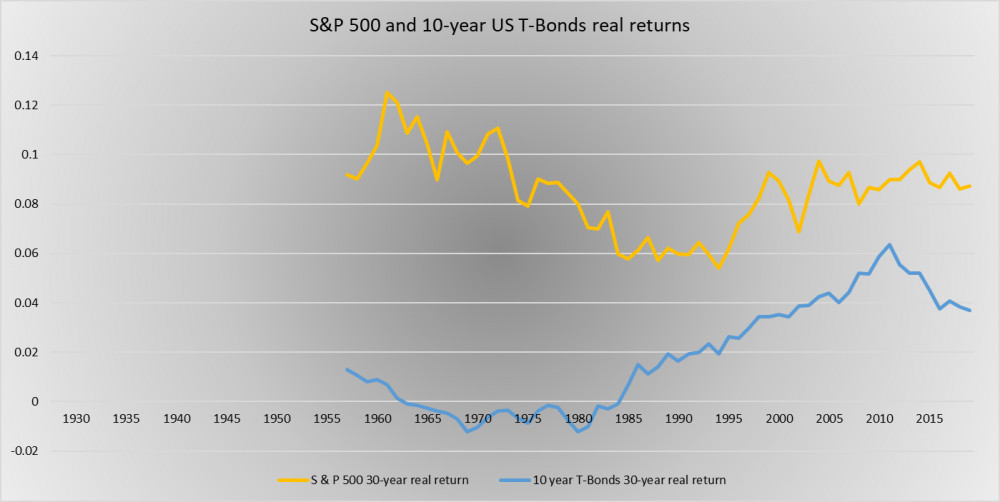 As you can see the inflation-adjusted bond returns, also called real returns were negative for many periods in the 1960s, 70s, and early 80s. Those would have been times when it was preferable to stuff dollar bills under a mattress rather than invest in government bonds.

Making the most of investing

If there were a few lessons I would draw from this, they would be

If you are ready to make the most important investment you can make, I’m talking about investing in your own financial education, then it’s time to check out the American Association of Individual Investors, the AAII. Membership of the AAII will provide you with access to regular reports, investing training courses, a stock screener, and other resources, all for a single annual membership fee. Copy link
Powered by WP Socializer
We use cookies to ensure that we give you the best experience on our website. If you continue to use this site we will assume that you are happy with it.Ok